Happy Birthday Canada.
I have hope for the future as things are looking quite sunny and I wanted to shine a light on Canadian Hookers who have pushed the boundaries of rug hooking…they are all brave souls.

Starting in the East Coast and moving to the West….except for the last:

I posted some of Craig’s work in a Rug Hooking group on Facebook a couple of years ago and asked hookers what they thought.It was unanimous….people were not impressed. And, that was what I thought the reaction would be. I think there is a  tendency to think of rug hookings as something beautiful, something you would place above your couch in the living room…and rug hooking can be that,  but it isn’t just that. 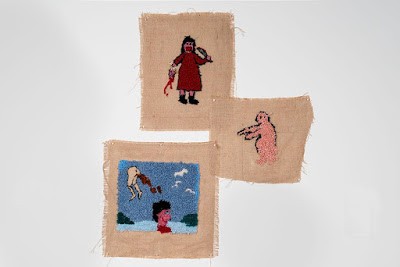 “…whereas traditional hooked rugs generally focus on domesticity, farming and fishing, Power repeatedly depicts scenes involving violence, alcohol and bodily excretions of all kinds: vomit, blood, urine and feces. His boyish mix of mischief and base humour has a strange compatibility with the “outsider” art form of rug hooking.”

Jean is a character. I remember seeing her at Rug Hooking School in Truro and she always seemed to be busy chatting away. I met her in person at the Mary E. Black gallery this spring in Halifax…and indeed, she has many a story to tell.

Jean created this rug “Beacon” and it was in the show “Peacework” in 2014 at the Mary E. Black Gallery. Jean created this rug at time when both the Newfoundland and Nova Scotia Rug Hooking Guilds were doing shows on lighthouses and they were very much on the minds of a lot of East Coast artists. http://thechronicleherald.ca/arts-and-crafts/event/1240206-peacework-2014-nsdcc-member-exhibition

Hanna is originally from Nova Scotia and is currently finishing her MFA at Carnegie Mellon University.

From Hanna’s website, “I am a fyber-artist and fyber-terrorist working and living in fyber-space.With a BA in Folklore I use folk media technologies to blend video, textile and the interactivity of games into immersive, artistic experiences I call “gamestallations”.
http://hannahness.com/

Her work is playful, thoughtful and gives me hope for rug hooking as it is being used by a new generation of artists. 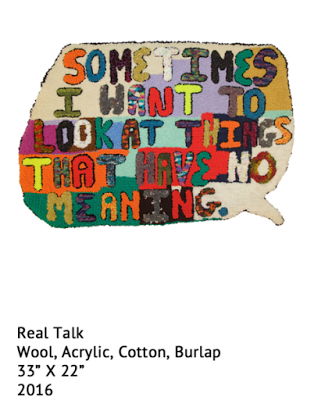 “When Edell arrived in Nova Scotia hooked mats were an established part of the folk culture of the region, though one that had not been turned to the purposes of visual art. Of course, by 1980, when Edell first encountered hooked mats, the use of traditional domestic crafts in the so-called “high” arts, was established. Joyce Wieland, for instance, had used quilting in her work since the mid-1960s, and in Great Britain Kate Walker had used embroidery since the early 1970s. With her hooked art of the early 80s Edell joined these pioneers as someone central to the introduction of so-called “women’s work” to the conversation of contemporary art.”  https://artgalleryofnovascotia.ca/nancy-edell

According to Cliff Eyland,

“The word “kinky” has been used to describe the actors that populate these works: some are partially-clad, hooded players who appear to be engaged in secret sexual rites, updated Greek “mysteries,” and carnivalesque transgressions.” https://www.umanitoba.ca/schools/art/content/galleryoneoneone/edell.html 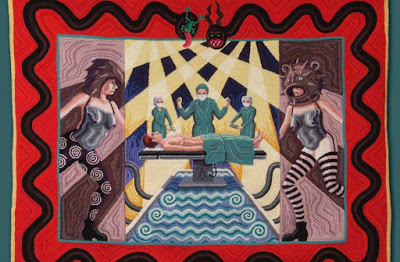 “Trish hooks rugs about places that are important to her family history, trying to answer questions about what “home” means to her.  Home is where the heart is and all of her rugs are about those things and events that are dear to her heart.” http://www.hookedrugmuseumnovascotia.org/rug-hooking-artist/2014-rhay/

This is “Across from the Art Gallery of Ontario” and Trish is able to make you feel you are standing in Toronto watching a street car speed by. It is interesting the way Trish has cut off the rug and only shown us part of the street car…she has a way of capturing the feeling of a place. 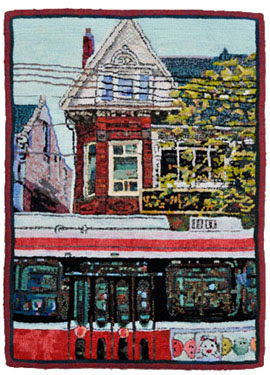 To find out more about Trish, Karen Miller did a interview with her as part of  the exhibit “Colours Caught in Fibre:  Rug-Hooking Made Modern” http://www.marzipanroad.com/tag/trish-johnson/

Delza is interesting as she was using nylon, not wool, for her rugs and her depiction of this grain elevator is what grabbed my attention. In her work, “she had a particular concern for endangered species of birds and plants”  http://www.narrativethreads.ca/explorer-explore/tapis_au_crochet_manitoba-rug_hooking_manitoba.html

She not only depicted natural species that were endangered but also structures that defined her area in Manitoba that were disappearing, like our lighthouses. 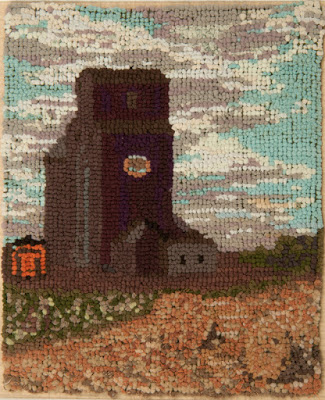 Yvonne’s work was included in “Home Economics: 150 years of Canadian Hooked Rugs”.  One of the pieces was titled  “Use Me” and I thought it interesting as she seems to be saying..I am a rug so put me on the floor..that is my purpose. In fact..the curator had said Yvonne would have liked her rug to be on the floor in the exhibit and had no problems with people walking on it.  This idea of utility goes against what I had always hoped for hooked rugs..to be thought of  more as paintings on a wall and not something to be walked on. But, one of my knowledgeable painter friends reminded me of murals..they were for the ceilings ..walls…floors. And so sure..ok..rugs can be for the floors. 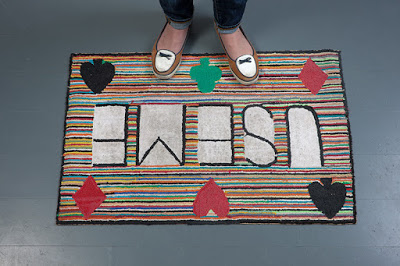 I was trying to stay away from rug hookers I had in my, “10 Rug Hookers to Watch in 2016 ” list but I couldn’t do it…I had to include Michelle. The colours in her rugs are vibrant and the waste hosiery that she uses gives a unique effect.

“Working with my hands is bred in the bone. Using textiles in my art making and their tactile qualities has a grounding effect for me. They bring me back to that place of possibility.”
http://www.michellesirois-silver.com/ 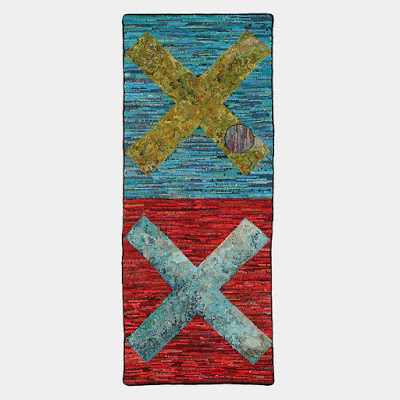 Emily is a Canadian Icon. She is known, of course, for her paintings but she also did rug hooking. She was using Indigenous subject material in her work to capture British Columbia and  I thought it very brave of her.  Canada is going through a reconciliation period with our Indigenous people and it makes me think of the role artists have to play in the process. 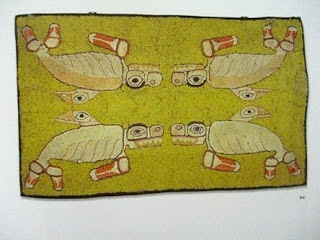 This is an interesting article in Canadian Art which asks the questions, “Is Indigenous art any art made by an Indigenous person? Or is it somehow art that is the product of particular cultural traditions? Or could it be something like: art about Indigenous issues or ideas? And, by the way, what is an Indigenous person?”.
http://canadianart.ca/features/art-by-indigenous-artists-or-art-about-indigenous-issues/

All the hookers who worked in the cottage industries like in Chéticamp and Newfoundland. Their names aren’t on the rugs but…
“Women could earn their own livelihood and were no longer forced to marry young. The men looked at the women with new respect …..”
http://www.heritage.nf.ca/articles/arts/silk-mats.php

It does make me wonder what these women would have created on their own given a blank piece of burlap. 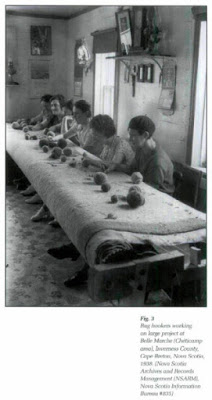